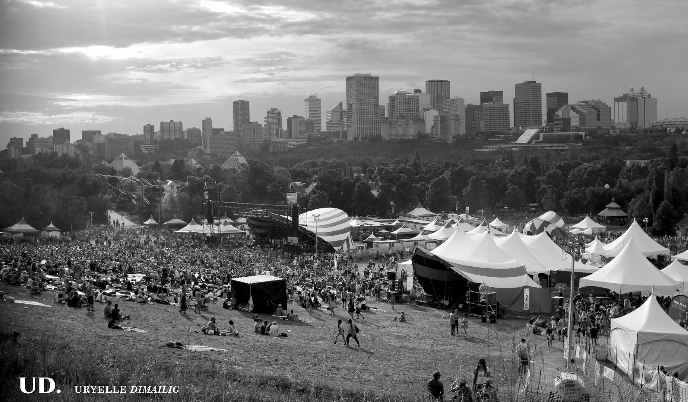 The Edmonton Folk Music Festival—as mentioned in my last article—is a pretty big deal. To illustrate exactly how big of a deal, tickets to the festival sell out within minutes while lotteries are drawn simply to enter the grounds when gates first open for the day.

Arguably one of the most popular festivals of the year, it boasts an army of over 2,500 volunteers alone, not to mention the thousands more who attend as guests. But whether volunteer, concert-goer, performer or passing observer, this annual event is indeed a magical time for all: four days of stunning scenery, world class music, united community, and general feel-good vibes unique to the one and only “Folk Fest.” For those of you who missed last weekend’s festivities (or have never been), here is my round-up of highlights from my time there on Saturday and Sunday to get you caught up to speed.

For those of you who are regulars, well, consider this fond nostalgia.

My first day was mainly spent exploring the festival and getting acquainted with the grounds. First thing you’ll undoubtedly notice is the sea of tarps sprawling over the steep hills of Gallagher Park on one side and the stunning view of Edmonton’s downtown core perched on top of the river valley on the other—the view alone is a big draw for many. You feel like you’re in an oasis in the middle of the city!

There were plenty of kid friendly amenities in the festival as well including a spray park, face painting and a family fun area. For us grownups, our fun area was known as the beer gardens, which offer up pitchers of beer, hotdogs, and great conversation with new and old friends. Stick around after the sun sets and take in the glorious sight of a hill filled with twinkling lights and a night sky full of stars. Truly magical.

As for the shows, my goal on Sunday was to catch as many as I could and I feel my mission was accomplished, having caught seven concerts that afternoon. Here are a few of my favourites: 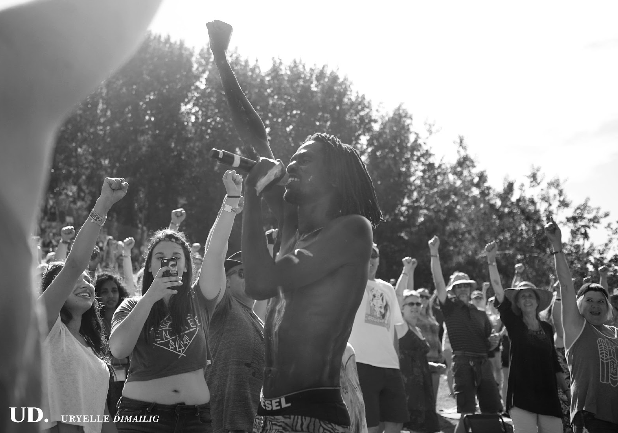 Emmanuel Jal: So I stumbled on this show by accident. I was actually on my way to find ice cream but I couldn’t help but stop as I passed by Emmanuel Jal’s stage. This guy had energy for days, jumping up and down, dancing in the crowd and pulling the audience on stage to join the show. Jal’s empowering songs affected the crowd too—everyone was up on their feet dancing along as the park resounded with anthems of love and peace, such is his mandate. The incredible story of Jal’s past life as a child soldier in Sudan, turned hip-hop artist and activist hailing from Toronto made for an uplifting performance that not only entertained but inspired all those who watched. For music with a message, an artist with a story, and an entertainer with passion, Emmanuel Jal’s your guy—his show was a definite highlight of the festival and it’s all thanks to ice cream.

I’m With Her: Shifting musical stylings somewhat after the Emmanuel Jal show, I drifted over to Stage 2 where the ladies of I’m With Her began their soft-spoken, gentle set of folksy originals and cover songs. These ladies had the most angelic voices which, when paired with their delicate instrumentals, served as the perfect complement to the sunshine and stunning view of the river valley behind the stage. Considering you were surrounded by thousands of people, the I’m With Her set had a magical way of feeling intimate and close, as every live performance should.

Fairfield Four: So funny story. While I was in the media tent sorting through the day’s photos, a group of older gentlemen arrived and media volunteers were busy trying to get them to their assigned stage. One of the men took a seat beside me, smiled and said, “How do you do,” in the smoothest, southern baritone voice I have ever heard. Being a newbie to the folk music scene however, I couldn’t quite place what kind of music they would be playing.

An hour later, there I was swaying to the stylings of the legendary Fairfield Four as their airtight four-part acapella harmonies and rolling bass lines took you through a journey of gospel tales and rich southern history. Incredibly humble for a group whose songs have won them Grammies and major Hollywood soundtracks, these talented vocalists are the third generation to hold a place in the Fairfield Four’s almost century long history. What a privilege it truly was to watch them live in concert. 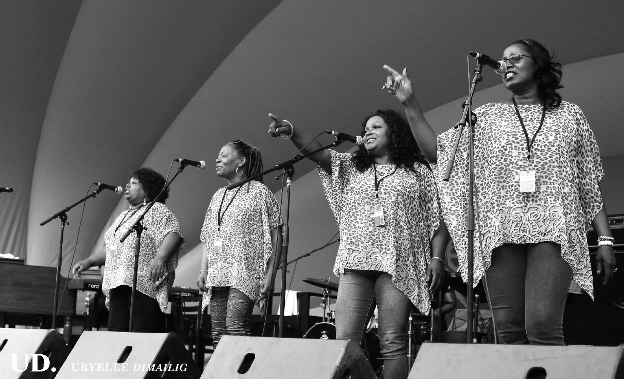 The McCrary Sisters: Continuing on the gospel note, the McCrary Sisters took to the stage shortly after. As daughters of one of the founding members of the Fairfield Four, it was clear that musical talent ran through the family. The sisters, with their pitch perfect harmonies, powerful vocal riffs and impeccable showmanship, took turns sharing the spotlight with their spirited set of blues, soul and gospel songs. My personal favourite was their song “Let It Go” which was an anthem of positivity and love. To top it all off, the Fairfield Four joined the Sisters on stage for an amazing joint performance that had everyone on their feet dancing and singing along.

All in all, I LOVED every second of my Folk Fest experience. Yes, the music was amazing but even more important was the incredible spirit of community, inclusion and support you felt when you were there. If you have a chance to make it to next year’s festival, I highly recommend it. Cheers to all the Folk; see you next August on the hill!

Uryelle enjoys photography, horror movies and Boston accents. If there is ever an argument over who likes frozen yogurt more, Ury will always invariably win.

Previous: Ideas for a Halifax bachelorette day
Next: Matt Nathanson’s Gold in the Summertime