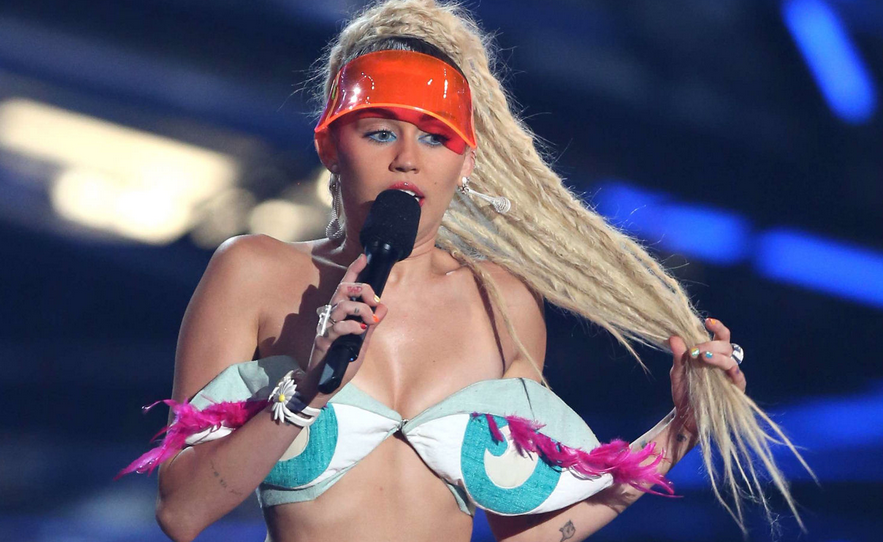 Miley Cyrus shocked the world on Sunday night while hosting the MTV Video Music Awards – by cursing, making crude jokes, talking about drugs, dressing scandalously and even ‘accidentally’ dropping a curtain exposing her nipple for a brief moment on live TV.

When I said “shocked the world” what I obviously meant was “met the expectation of every man, woman and child on the planet who has access to the internet.” This was not a surprise. A surprise would be Oprah sitting on a mountain of money, making it rain on herself while yelling “NO ONE WILL EVER GET ANY OF THIS FROM ME EVER AGAIN!”; Taylor Swift kicking a child while declaring, “Bow down, I am Queen!”; or Shonda Rhimes ending a season of Grey’s Anatomy without killing off a main character for dramatic effect.  All of these things are surprises because no one believes that they will actually happen.

I could argue that society has made it necessary for people like Miley, Britney and all the others, to take to this stage to shed their adolescent innocence in such a blatant way.

What would you do if you were told you needed to maintain your pre-teen image/innocence to appease the parents of your 8 year old fan base? Do you say OK? Do you tell them to GTFO? Or do you just make the transition to adulthood and hope that at some point people get the hint that your target audience is no longer the elementary school crowd?

Sometimes when those child stars try to make the transition gracefully they are met with criticism at every turn and then – BAM, someone is getting naked at an MTV Awards show.

In 2009, when Miley was 17, she did this ‘controversial’ performance where she does what people declared a ‘revolting pole dance.’ [Huh? You think that’s revolting? Let me show you!] Her next big single was Can’t Be Tamed. [I will write a song about how you can’t tell me what to do. Suck it.] She got engaged, an event everyone had an opinion on. [You think I’m too young for EVERYTHING!] Then a broken engagement. [I do what I want. I can’t stop. I won’t stop.] And then the inevitable twerking into Robin Thick’s groin at the 2013 VMAs. [The series of events here was clearly so planned…I’m not sure how you all missed what I was about to do.]

The transition was complete. Miley and innocence had finally severed ties and she could now live her crazy life in peace. There are no boundaries now, she can do whatever she wants. And she does, as we see from last night.

Nothing Miley did at the show was shocking. Some of it was annoying, unfunny and uncomfortable, but overall, it was just Miley. Love her or hate her, she’s owning that weird thing she calls normal. So let’s stop being shocked by Miley and then maybe they will stop asking her host awards shows.

Previous: Five times you will cry during The Lion King musical
Next: Five films to see at the CIFF 2015