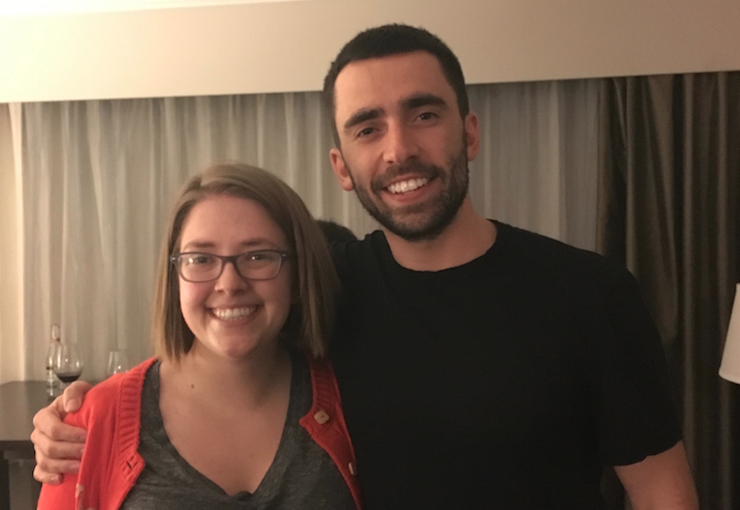 What happens when you have the chance to spend a Friday night with one of your favourite musicians? You take it. Well, to be fair – if you’re me you at first say ‘no’, then you conquer the desire to have a nervous-puke, and then you say yes and take it. At least that’s how it went for me when I found out Michael Bernard Fitzgerald was coming to Halifax to promote his upcoming release, I Wanna Make It With You, a mini promotional tour that included a private hotel room concert.

You might be thinking, ‘Why is this girl so into a musician I haven’t heard of?’ Well, just like a lot of other people, I can relate most major, and other not so major, moments of my life to music.

I know, it’s terribly cliche – but it’s entirely true. And in more than a few cases, those specific songs were written (or at least performed by) Michael Bernard Fitzgerald (aka mbf). Let’s take a little walk down memory lane…

Hey Ya (cover)
Second Year, University of Calgary (2007)
The first time I heard the name Michael Bernard Fitzgerald, I was in my second year at the University of Calgary, taking in a typical Friday afternoon at That Empty Space. A favourite of students who were already nursing hangovers from a big Thursday night out, we piled in a room full of old couches, with cheap cans of Pilsner on offer.

We sat on the floor amid backpacks and the flip-flopped feet of res kids to hear live music – usually a small touring band who was looking to get an extra show in before the played a bar in Calgary that night. The music of mbf was on offer that day. We were treated to an ace cover of Hey Ya and enough great originals that I bought the his cd, black and white phonetics (love.)

Highlight of the day? When I went to ask if I could buy the album he said ‘yeah of course, I just have to be quick because I have my mom’s van and I have to pick her up from work.’ Love at first interaction.

Movie Life
Year One of Halifax (2010)
After finishing up my undergrad in Calgary, I moved back to the East Coast to pursue a Master’s degree. This was right around the time that mbf put out the MBF Love Ep, and of course it was on pretty heavy rotation. During school we really embraced the ‘work hard, play harder’ mentality, and because of that I’m pretty sure in the spirit of social media I had many lyrics from Movie Life accompany many photos of me taking shots. Because – classy.

No Regrets
Visiting Calgary/Red Deer (2012)
In May of 2012, I packed my bags for a little trip back to Calgary. The visit was twofold: visit my family out in the country, and go to Calgary to see friends and Bon Iver (!!!) in concert. At the time of this trip I was about five months into a new relationship, still firmly in the whole honeymoon phase. While driving between Red Deer and Calgary, I was listening to CDs in my rental car (as we did in 2012), and mbf’s No Regrets came on. In that moment, I remember being completely drawn into the lyrics: “…any sort of gathering place, that look on your face, without you this world is just people.” Heart eyes emoji.

Care for You
Getting married (2015)
Three years later, I was getting married to that guy that was giving me all the heart eyes in my rental car. The song I chose to walk down the aisle to? Care For You. Listen to it. It’s the cutest.

I Wanna Make It With You
First time hearing mbf on the radio (2016)
The caption is self-explanatory, but this was a big deal. Imagine my surprise upon finally hearing an mbf song on the radio all the way out here in Halifax. Guys, this could be the album that finally makes it happen for mbf in a big way!

Since leaving Calgary, I’ve been able to watch mbf’s career grow from afar through the instagrams and tweets of my friends. I’ve even been able to catch him a few times on the right coast, with tours in support of his last albums bringing him to Halifax for a few shows.

The promo tour for I Wanna Make It With You has seen mbf trying out the new songs across the country through a series of intensely intimate hotel room concerts. Me and about ten other people piled into a suite, taking up space on footstools and beds to hear songs about mbf’s dating history and recent breakup, a theme that travels through the new album. While I’m feeling pretty confident that the break up component won’t ring true in my life, I can’t wait to hear the album (coming out March 11, 2016!) and have a whole new set of jams for making memories.

Splitting her time between thinking about her dog and spending time with her dog, Martha has become the person she used to loathe. Other than that, you can find her enjoying pizza, good coffee and pretending she isn't interested in fantasy sports.

Previous: A Complete Guide to the Guys of the Gilmore Girls
Next: 11 things that happen to everyone in an escape room

'mbf & me: our journey to date…' has no comments