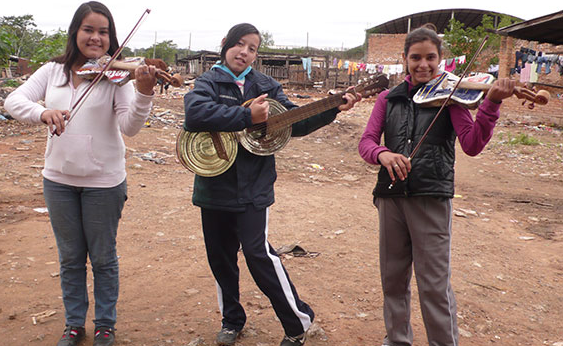 In 2009, a couple of filmmakers traveled to Paraguay hoping to make a film about underserved kids in the country and stumbled on a story so amazing, you would think it had a screenwriter – The Recycled Orchestra.

Landfill Harmonic, which was just screened at the Calgary International Film Festival as the Green Carpet Gala film, is a documentary that tells a story of a music teacher and a group of kids over the course of four years.

The film opens with a man, Favio Chavez, who started giving free music lessons to kids in the town of Cateura – a slum built on the main landfill for the whole country. Favio didn’t have enough instruments for the amount of children interested in the lessons and enlists the help of Cola, one of the local garbage pickers, to create instruments for the kids – out of things like forks, sheet metal, discarded x-rays and broken stilettos. If that wasn’t ridiculous enough, they then taught these kids how to play them, keep them tuned and fix them.

The Recycled Orchestra was born.

They played their first concert to a half empty gym to an unenthusiastic audience. They were not great because…this is real life, not a movie. They practiced, played and got better. Finally one day they were invited to go play at the Rio+20 UN conference…taking the children for the first time out of the country, on a plane and to the ocean.

I felt like I was watching a grittier more heart wrenching version of Sister Act II…and any second Whoopi Goldberg was going to make an appearance in a nun’s habit. At their very first performance the kids played Ode to Joy…that is not a coincidence. When you want to turn a child’s life around with music, you start with Ode to Joy (Whoopi would agree).

So…they go to Rio and it gives you the warm fuzzies. You think, “This story is very cute, I like that they use instruments made from broken kitchen utensils and tin cans. It reminds me of Meryl Streep in that one movie where she had all of those violins and taught kids in East Harlem how to play…but those instruments were real and these ones are more hard core.”

But the story doesn’t end there…

Thanks to the internet, they became YouTube sensations. Videos of the kids playing these instruments went viral. News outlets around the world were talking about the Recycled Orchestra, and they started getting more invitations to perform from around the globe. Before you knew it they were on top of the world traveling to exotic places like Denver and Saskatchewan, (and many other cooler places, but I do like that Sask made it into the film) playing at Ted Talks and touring with Megadeath (…which is apparently really big in Paraguay).

While all that is happening, life is still going on back home. In 2014, a flood devastates their town, destroying the homes of several members of the orchestra, but they continue on. Using money from their performances to purchase a place for the displaced members to live and the story comes to an end. The Recycled Orchestra takes the stage of a beautiful auditorium playing music light years better than at the start of the film.

While neither Whoopi or Meryl made an appearance, I still think this story was made for the screen. I would not be surprised if one day we saw a ‘based on’ version of this on the big screen – starring Meryl Streep as Favio Chavez. What? It’s Meryl, she can play ANYTHING.

For more information about the movie and screening in your city check out the website or Facebook page (Where you can find photos of the Orchestra playing recently for the Pope and giving him his own recycled violin.)

Previous: Take it from a Canadian ex-pat, summer in Alberta is the best
Next: What we’re listening to: October

'Landfill Harmonic, hitting all the right notes (REVIEW)' has no comments