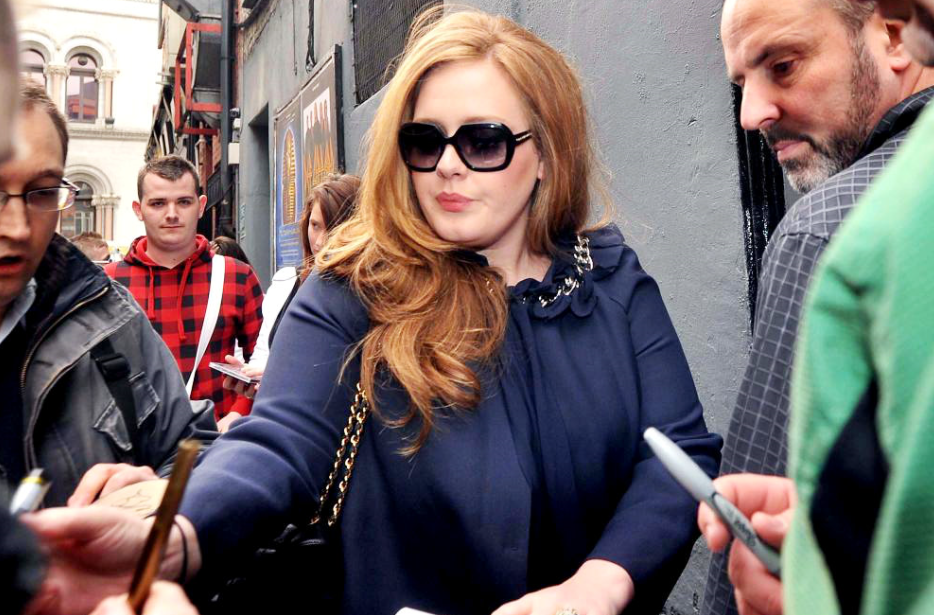 Besides the obvious – she has the voice of an angel – we all love Adele because she sings songs that make us cry and allow us to be emo while still being able to feel like classy adults.

In grade seven we would sit on our bunk beds, playing the Backstreet Boys on our ghetto blasters while crying about our failed puppy love and drowning our sorrows in a giant glass of Kool-Aid. Now we sit alone in our kitchens at our Crate and Barrel tables, listening to Adele, drinking a bottle of wine crying over failed relationships and ‘what if’ moments of the past. Adele just lets us be what we have always been – an overly emotional generation of hard done by romantics who watched too many RomComs starring Julia Roberts and Richard Gere as children.

Adele has had many MANY amazing songs, but what are the ones that people have gone bat-shit crazy over? Someone Like You and Hello. There have been others, but these are the ones that have gone so far as to get SNL parody skits. These songs are both about dealing with a breakup or an unhealthy obsession with someone you’ve had a relationship with eons ago. Ones that you would listen to and be like,”I’m over it, I swear…but I’m totally not…I miss that mother f*%#@!. Wahhhhhhhh.” And then you would drink yourself into a coma and pass out in a puddle of your own tears.

There is something about it being Adele that makes this type of behavior acceptable.

Co-Worker: “What did you do last night?”
You: “I listened to Justin Timberlake’s Cry Me a River on repeat, drank a bottle of wine and then woke up on my bathroom floor at 4 AM covered in vomit. It’s been a rough morning.”
Co-Worker: [wide-eyed and clearly troubled] “You need help.”

Co-Worker: “What did you do last night?”
You: “I listened to Adele’s Someone Like You on repeat, drank four bottles of wine, passed out on my bathroom floor, woke up, slipped on vomit, had to go to the hospital and get stiches on my face and got home an hour ago. It’s been a rough morning.”
Co-Worker: [sympathetically nods] “Oh yeah, I’ve been there.”

Adele has a hard time letting go. Our society has a hard time admitting that they are really a bunch of teenagers trapped in the bodies of 30 and 40 year old adults and thus need Adele to give them that outlet to really connect with our emo cores and let the tears out.

Basically, we’re a society of emotional wrecks that need Adele to feel whole. Thanks Adele for normalizing our craziness.

Previous: Why each storyline in Love Actually is depressing AF
Next: Don’t believe the headline: How to not look stupid on Facebook

'Why are we obsessed with Adele?' has no comments