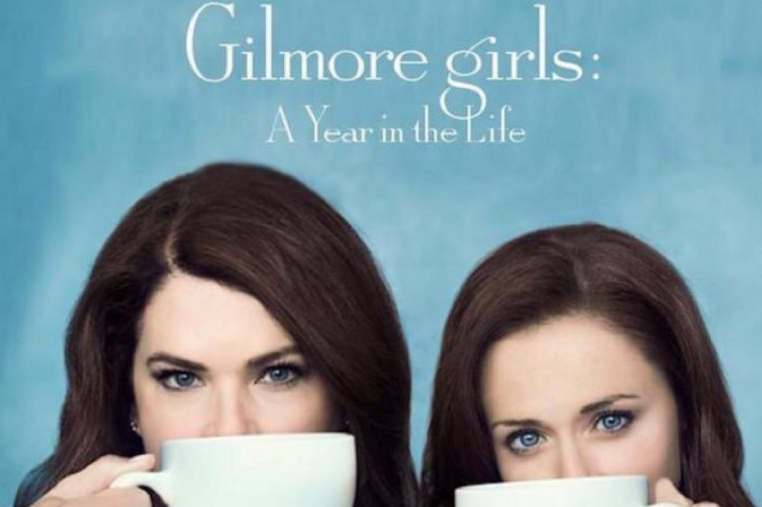 Gilmore Girls: This Dysfunction Will Never Change was released on Netflix on Friday…except they changed the title to Gilmore Girls: A Year in the Life because they thought the real title would be a spoiler.

The four episode mini-series brought fans back to Stars Hollow for 6 hours of nostalgic bliss, while letting us see what Rory, Lorelai and Emily’s lives look like 10 years after the series finale.

As a fan, there are so many things I could write about. There is a novels worth of opinions in my head. Instead, I will give you some moments…that practically make up the internet’s version of a novel. The moments I had the most visceral reactions…the ones that had me jeering and cheering. So…best, worst, happiest, saddest and most enraging. Enjoy! 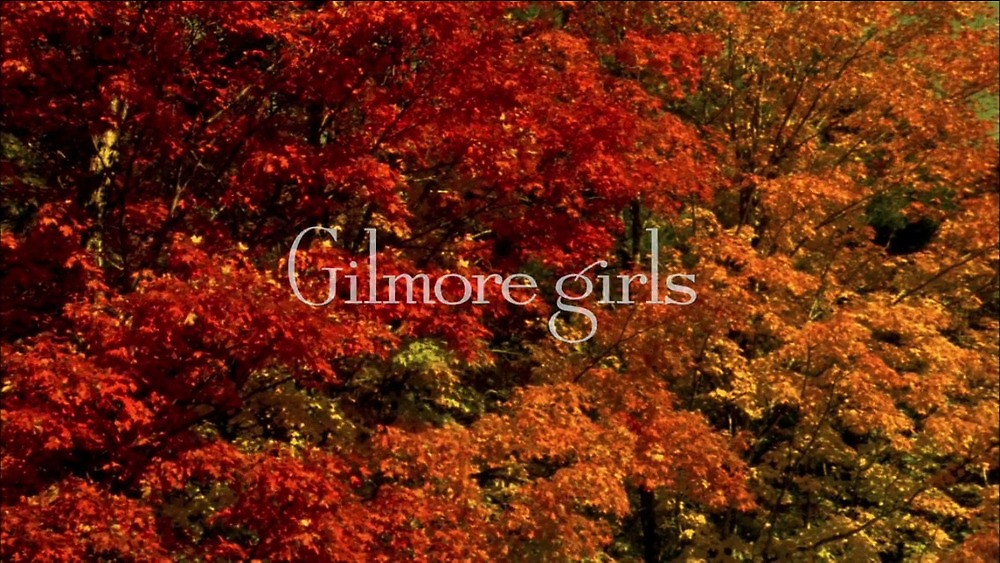 Once it was clear that the opening credits were not going to be a part of the show, I went into a blind rage and had to re-watch the first 20 minutes of Episode 1. I need to sing along with Where You Lead, or it’s not truly Gilmore Girls. 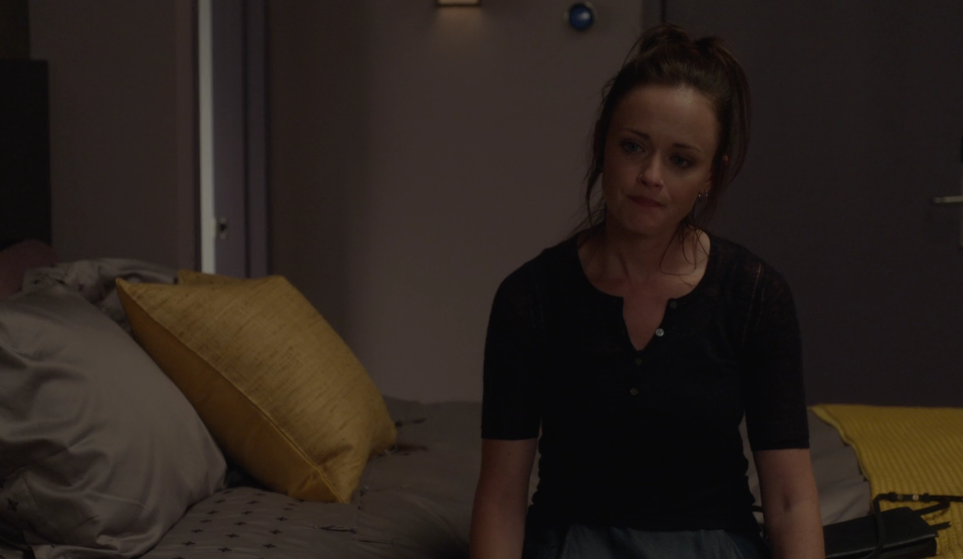 “I’m blowing everything. My life. My career. I’m flailing and I don’t have a plan or a list or a clue!”

Let me get this right. Rory is 32 years old, unemployed, homeless and has a love life that resembles an episode of Desperate Housewives: Bi-Continental Living. Sounds like golden girl Gilmore didn’t take over the world like she had planned. You know, when she decided to end things with Logan and focus on her career. Sure, she has written pieces for the Atlantic, New Yorker and Slate and has media groups asking for ‘meetings’, but it really just sounds like she is a decent freelance writer who occasionally hits the mark with a piece. What was funding her life in-between these seemingly sporadic gigs? Did they not want to tell us that she was also a Starbucks barista and/or a server at TGI Fridays, because that would be believable.

I am also annoyed that Rory didn’t learn from past mistakes. Believing she is so special that she dismisses opportunities that she deems beneath her for the big fish that she assumes are in her reach. I’m talking the Reston Fellowship at the New York Times and Conde Nast. Lorelai didn’t raise her with a silver spoon in her mouth, but that clearly didn’t stop her from living the mindset of elite entitlement. Emily was probably so proud.

[Rory’s failure to be, was my greatest joy in all four episodes. I feel so much better about my 30 year old existence.]

We all knew that Richard’s death was going to be a big part of how this story was shaped. Edward Herman, the actor who played Richard, died in 2014.

His death ended up being the emotional heartbeat of the season especially for Emily and Lorelai…and me, I admit. I teared up at his funeral and had a good long ugly cry during Lorelai’s second, more appropriate ‘best memory story’ of her father. 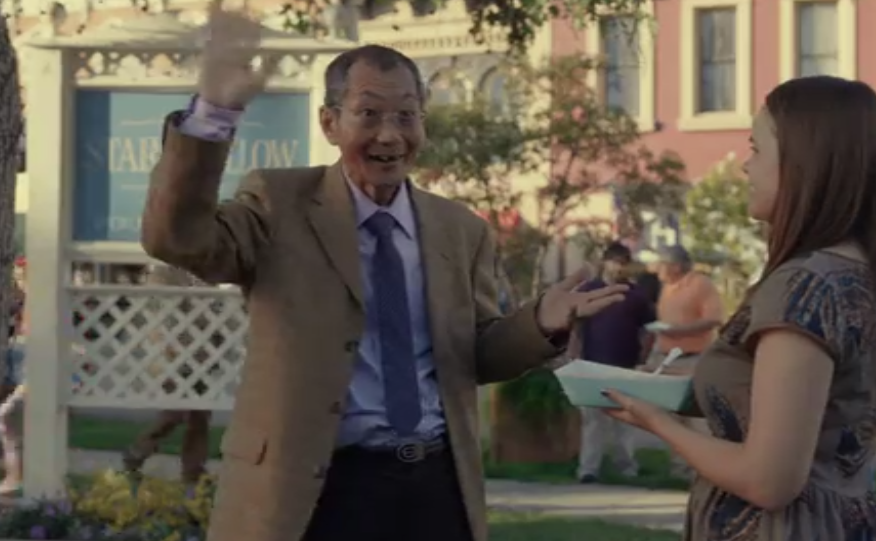 Mr. Kim is alive! In all seven seasons of Gilmore Girls, we never once saw Lane’s father, Mr. Kim. I don’t even think he was really alluded to at all. This is strange for many reasons including the fact that Mrs. Kim was a pillar supporting character, traditional family values were her thing and there were many scenes at gatherings of Lane’s extended family.

I had just assumed that Mr. Kim was dead. That he had died years previous and Lane and Mrs. Kim promised to never bring up his death themselves or around other people. Weird for normal people, not weird for the Kims. Then, in the revival, he just pops up out of nowhere and attends the food festival. WHAT!?!?!? Mind. Blown.

The disappearance of Miss Patty

WHERE DID SHE GO? Miss Patty lost approximately 800 pounds and is no longer Miss Patty. 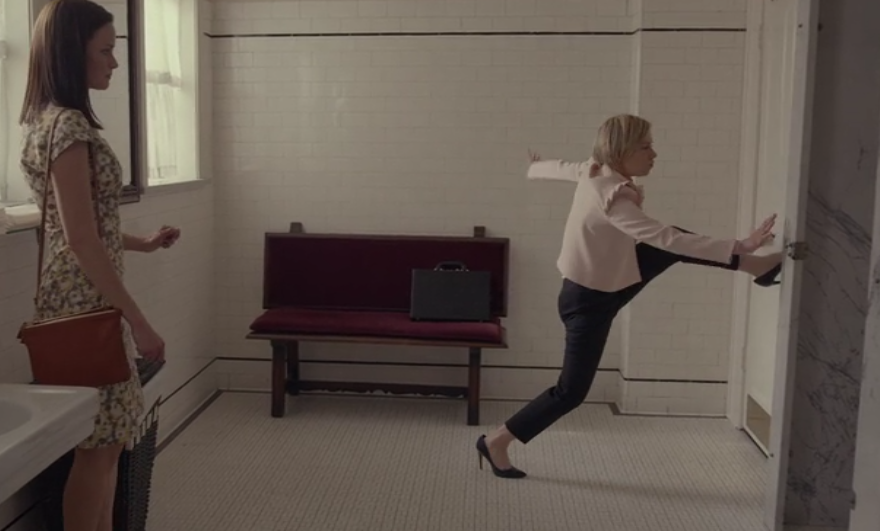 Paris in the bathroom

Paris Geller is arguably the best supporting character of all time, therefore, her meltdown in the bathroom was one of the best scenes in the entire season.

In true Geller fashion, Paris has a life meltdown in the Chilton bathroom after seeing Tristan, her former high school crush at alumni day.

SIDE NOTE: Tristan was not a Chilton alumnus – he didn’t graduate, he was sent to military school and shouldn’t have been there. Also, that was definitely NOT Chad Michael Murray. Fail.

She goes on a lengthy rant about how she is carrying around an empty briefcase to appear more important, she’s getting divorced, her kids hate her and the straw that is breaking the camels back is feeling insignificant around Tristan. Francie comes in and confirms what we are all thinking – Paris is more accomplished than anyone we have every met and needs to calm the F down.

In the ramble of 80,000 other things, she mentions that she missed her last period. Did you catch that? Because it is over now, and we have to determine for ourselves what will happen to these characters, I am going to believe that Paris has a third baby, her and Doyle work it out and she becomes the first female president of the United States.

“Fatherhood is going to be a loooooooot of pretending for me.”

Michel, the always irritated front desk manager at the Dragonfly, is going to be a father. That was a curve ball I wasn’t expecting. We find out that Michel has married a man named Fredrick and they’ve decided (or Fred has decided) that they are going to have a child. Michel mentions that Fred has ordered a baby, ‘or however that works’.

Michel brings me so much joy. (This could be the spin-off series we have all been waiting for.) 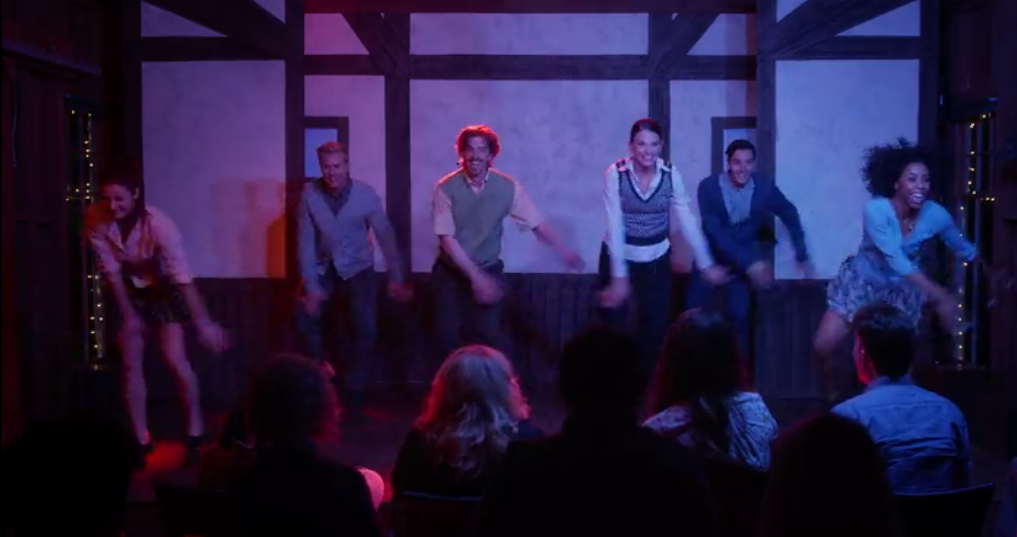 The only reason I could think that they would need to have a musical, would be to have place within the show that Where You Lead could be sung. Not the case. In fact, Sophie (who is played by Carol King, the singer of Where You Lead) is on the advisory committee for the musical and sings a song during a meeting AND IT ISN’T WHERE YOU LEAD.* And then they write a new song to replace the Abba songs, AND IT ISN’T WHERE YOU LEAD. I did however, like the new song very much. 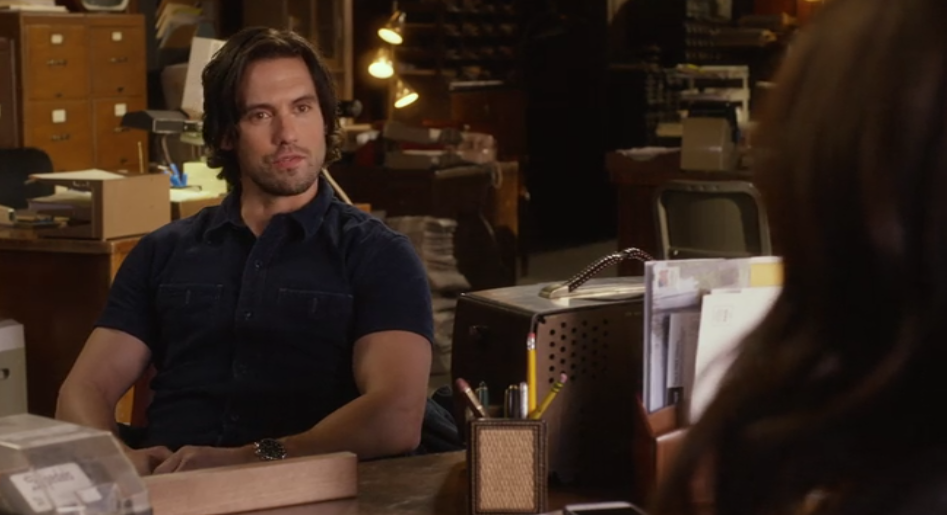 Besides the removal of the opening credits, the other biggest disappointment of the season was the lack of Jess. He had approximately a third of the screen time as the Stars Hollow Musical. What a crime!

Jess returns to Stars Hollow to help Luke get his mom and TJ out of a cult (of course) and pops by the Stars Hollow Gazette to visit Rory. She is life-floundering and in two seconds Jess fixes everything by telling her she should re-direct her life and write a book about her and Lorelai. Giving her the idea AND the content. And then he leaves. That took about 30 seconds.

Then he comes back for another couple of minutes to chat with Luke about nothing and finds out that Rory had written the first three chapters of his idea. He claims to be over her, but in true Danes-fashion, looks through the window sadly at Rory before leaving. 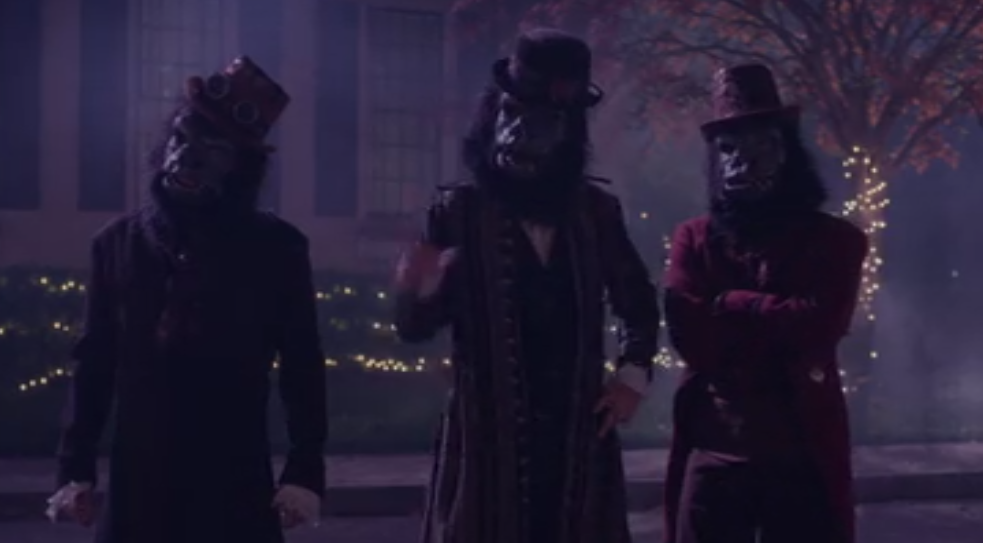 Return of the Life and Death Brigade

Colin, Finn and Robert come back with Logan to take Rory out on one last night of reckless extravagant ridiculousness. Colin buys a bunch of things (night club, car, inn etc.), Finn and Robert flirt with unintelligent women/men and Logan tells Rory that marrying his fiancé is the ‘dynastic plan’ (aka, the Huntzberger plan). Proving once and for all that being rich and elite is a sad shallow existence – but fun AF. 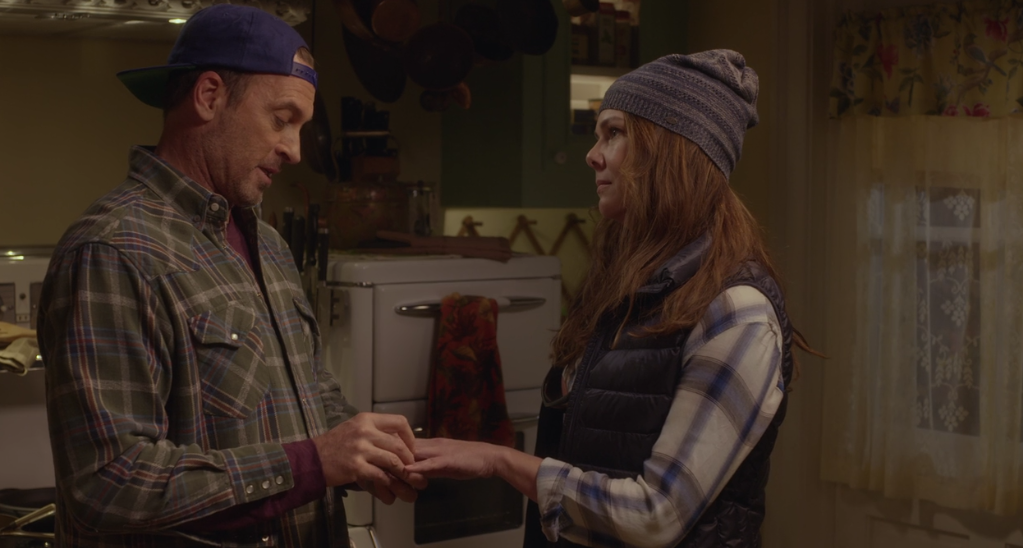 The proposal wasn’t a shocking or emotional moment. It was lazy. Lorelai proposing to Luke – again. In a kitchen – again. The only thing great about the proposal was Luke’s pre-proposal rant that included a piece about closet space, which was enjoyable. The negative reaction I had to this, was that they weren’t engaged or married already. Like – WHY? It is comforting to know that Lorelai’s personal maturity has stayed right where it was 10 years ago, at the level of a 16 year old. 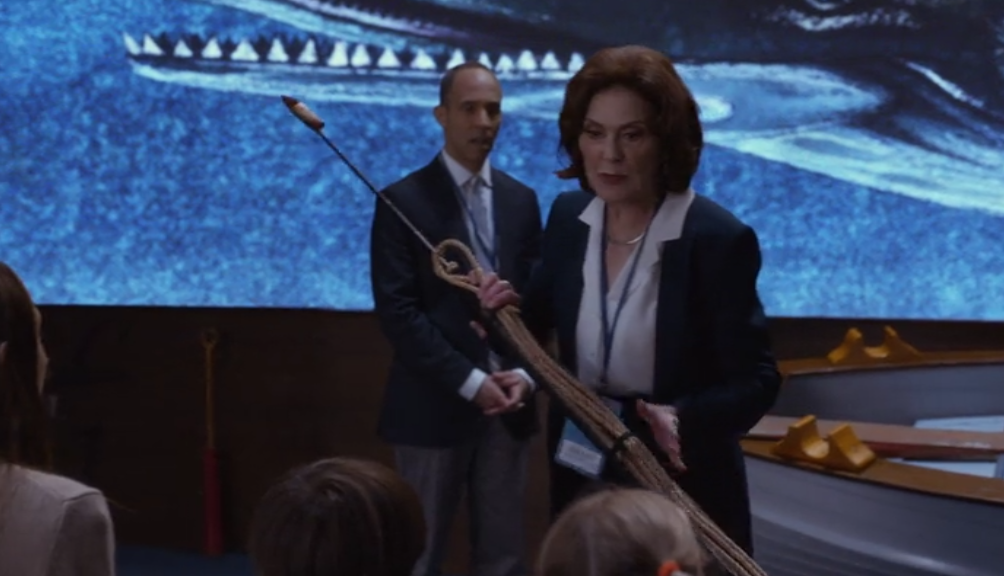 After Richard’s death, Emily unravels. She employs a maid who manages to have her entire extended family move into Emily’s (once the drill sergeant warden to all under her employ) house; leaves the Daughters of the American Revolution in a blaze of glory; starts drinking in the afternoon and finally, sells her mansion and moves to a beach house in Nantucket and becomes a museum tour guide. LIKE A BOSS.

I actually think that Emily’s resolution was the best and most healthy of all of the girls. Lorelai in second and Rory not even getting to the finish line. She blew up her former hostile and shallow life, and had a rocky transition, but in the end she was good with being alone. She has a suitor that is into her post-Richard and she could not care less. Emily is good with just being Emily. Best.

It was a little bit shocking. I mean, this is a classic Gilmore move, so not surprising that this is how the story would end. It’s a full circle, throwing another small life into complicated chaos…and even more chaos if it turns out the baby daddy is the Wookie and not Logan.

The last four words confirm that Logan has and always will be, Rory’s Christopher. (Unless, again, the father is the Wookie – unconfirmed.)

It’s rather infuriating that Rory’s story ended on such an unresolved note. Except for, I guess, Paul breaking up with her – which was a great relief to all viewers who spent six hours feeling sorry for this guy who was treated poorly by a self-centered, irresponsible and rude Gilmore girl. Good on you Paul. I would hate to have your fate in limbo for eternity.

*I understand that I Feel the Earth Move is a favourite of many, but not me. It is not inherently Gilmore like Where You Lead. Don’t fight me on this, you will lose.

Previous: Booby Ball 2016: Get Ready for Paradise City
Next: Auto-tunned Belle aside: Best parts of Beauty and the Beast (SPOILER)

'The best, worst and weirdest moments of Gilmore Girls: A Year in the Life' has 1 comment